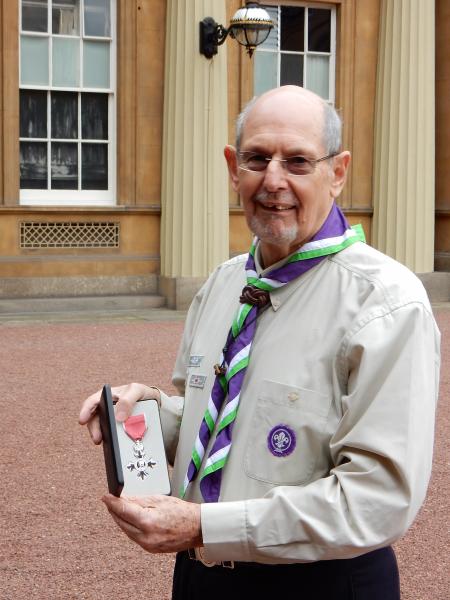 Tony Guy
I was born in Blackpool in 1937, went to Manchester University and trained in the Atomic Energy Authority in Lancashire. I moved to Warwickshire in 1971 and joined the Automotive Industry. In 1984 I became an independent Management Consultant going into companies that were in trouble normally as Operations or Managing Director. I have been working to develop electric vehicles for the past 15 years and am still working on special projects. I recently moved to the centre of Stratford on Avon.

I have been involved in Scouting for over 72 years as cub, scout, venture scout, leader and commissioner. I started the Gang Show, a scout and guide variety show, in 1962 in Blackpool and started Warwickshire Gang Show (WAGS) in 1972. I have been involved in the County Scout Executive Committee for over 40 years acting as Chairman, Scout Ambassador, Chair Communications committee, Director of Warwickshire Scout Enterprise. I am now County Communications Manager and Business Director of WAGS.

Find the perfect volunteering
opportunity just for you.
Sign up today!

Advice and guidance on good
practice for recruiting and
managing volunteers.

Learn more about recruiting
and managing volunteers
for your organisation.

Receive regular updates with
all our latest volunteering
opportunities.

Guidance and support to help
your group/organisation set
up, develop and grow.

Our forums give you the
opportunity to network,
influence and learn.

Guidance to help you identify
and secure a sustainable
income.